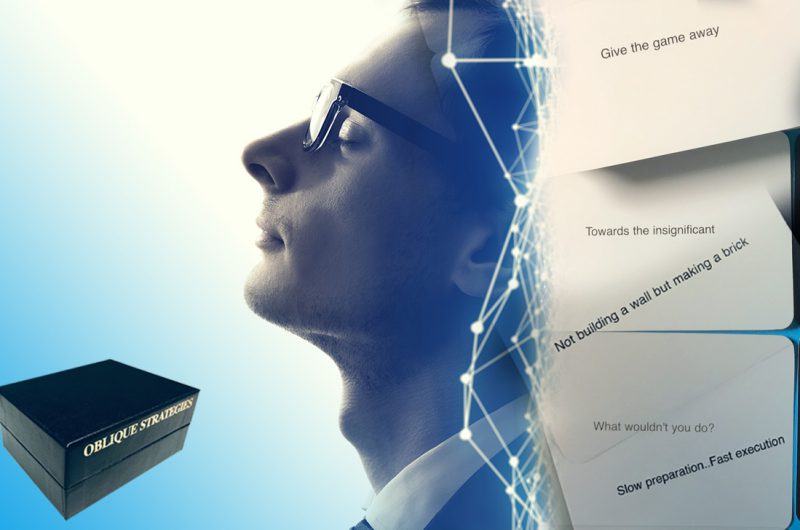 What do you do when you’re in the midst of creating something or trying to build something new and the ideation process stops or abruptly stalls out? Suddenly your brilliant idea doesn’t have the freshness that you originally planned, or everything about the idea seems flat and similar to what somebody else already did. “Panic!” “Copy someone else!” “Start completely over!” These typical reactions aren’t always the best ways out of this situation.

One of my favorite creatives, musician Brian Eno, and his art school painter friend Peter Schmidt, created card decks called Oblique Strategies to help keep the good thinking juices flowing. They are designed to help break creative blocks by encouraging lateral thinking. They sold small quantities of these decks in the 70s and went on to re-release them over the years following. They were hard to find and waiting for a collector to post a deck on Ebay was the only way to acquire one. This eventually convinced Mr. Eno to mass produce card decks and sell them on his own website.

I just ordered a deck for myself after watching a documentary about Brian Eno. If you don’t know who Brian Eno is, you surely know many artists that he worked with—Roxy Music, David Bowie, David Byrne, Paul Simon, and Grace Jones to name a few. Many other artists were later inspired by Eno such as Coldplay, Phoenix, and MGMT. His card decks were originally used by musicians to inspire song and lyric writing, music making, and even sound production and engineering.

It’s an interesting strategy to randomly pick a card out of a deck to shift thought laterally and stimulate a newer, unthought of idea. As CLM continues our focus on challenger companies for our upcoming Dog Eat Hog speaker series, the real-world impact of looking at a situation from a different angle really hits home. Oblique strategies yield out-of-the-box thinking to create disruptor brands in crowded marketplaces, and disruptor marketing that stands out too.

Examples of the cards:

Some cards evolved from observing underlying principles: “Not building a wall; making a brick.” “What to increase? What to reduce?”

Some cards recognize in retrospect: “Look closely at the most embarrassing detail and amplify.” “Honor thy error as a hidden intention.”

Many cards were simply formulated: “Work at a different speed.” “Try faking it.” “What would your closest friend do?” 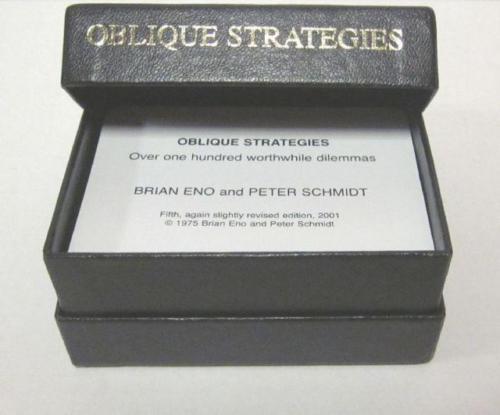