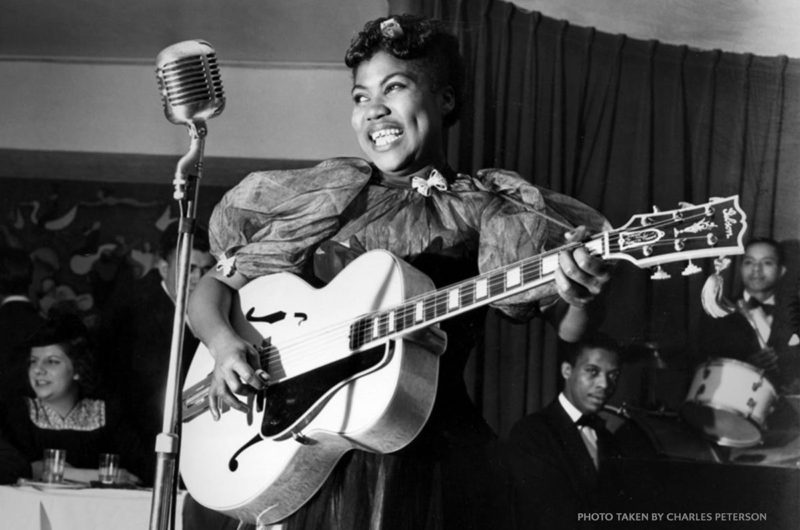 Imagine an alternate universe without the frenetic fretwork of the late Eddie Van Halen, without Eric Clapton, Jimi Hendrix or Jimmy Page. How about a world without the King of Rock and Roll replete with his unruly pelvis and whiplash grin? Sure, other musical greats like Bo Didley and Muddy Waters played a part in the sound we now call rock and roll, but it was a black woman born Rosetta Nubin, later known as Sister Rosetta Tharpe, who now holds the undisputed title of The Godmother of Rock and Roll. Let’s have a look at her influence in six parts, like the strings of a guitar.

Rosetta (Nubin) was born in Cotton Plant, Arkansas to a family of cotton pickers who were faithful churchgoers. By the time she was four, Rosetta had begun playing the guitar in her church and was considered a musical prodigy. By the age of six, she became a part of a traveling evangelical group. At 19, she had a short-lived marriage to Thomas Thorpe. A corruption of his surname became a part of her new identity, Sister Rosetta Tharpe.

In 1938, 23-year old Sister Rosetta made her first recordings with Decca. All four songs became instant gospel hits. The song “Rock Me” has been acknowledged by rock and roll greats such as Elvis Presley, Jerry Lee Lewis and Little Richard as having a profound influence on their music.

It was her performances at the iconic Cotton Club with contemporaries like Cab Calloway and Duke Ellington, where Sister Rosetta began to experiment and step away from her gospel roots. She began to fuse gospel music’s expressive qualities with greasy Mississippi Delta blues and the free, improvisational swing of New Orleans jazz to create a racy, new brand of raucous vocals and distinctive guitar picking and aggressive distortion.

Touring was a necessary and ongoing part of Tharpe’s 40-year career. Long before the Civil Rights Act of the late 60s, the ugliness of segregation was in full effect, making food and lodging challenging to come by for Rosetta and her crew. While not officially credited with having the first tour bus emblazoned with her name, Sister Rosetta was most certainly one of the first. She needed a place where she and her tourmates could sleep and eat. What has become the standard milestone for rock stardom was once a solution borne out of necessity. Despite being treated so poorly based solely on her skin color, Tharpe reached out to white gospel singers, The Jordanaires, and invited them to tour with her. Throughout her career, she continued to make an effort to bridge the gap with her music.

A New Beginning in the Old World – String Number 5

In the late 50s, as modern rock and roll had gone mainstream with white bands, her career began to wane. Rosetta received an invite from musician and fan Chris Barber to tour England with his band. In the U.K., she found renewed fame from an audience enamored with Americana music’s rootsy, original sound. Her most notable performance took place at a train station in Manchester. The mostly white audience was on one side of the railroad tracks while Rosetta and the other acts performed on the other side. Symbolically the music became the bridge to bring both sides together.

As with many artists who were ahead of their time, her brilliance went unrecognized until long after she had played her final note on this earth. In the early 2000s, a couple of documentaries garnered attention for Tharpe’s story. What seemed an apocryphal music myth became an incredibly real story about a charismatic, musically-gifted black woman whose spirit, vision, and perseverance gave her a wildly successful career that spanned forty years. She achieved fame, wealth, and opportunities that other black women of the time could only dream of attaining. In 2018, nearly 50 years after her death, Sister Rosetta Tharpe was inducted into the Rock and Roll Hall of Fame.

Today, we can still hear traces of Sister Rosetta’s musical DNA throughout rock music of the past 70 years. Elvis emulated her picking style. Chuck Berry admitted that he’d made a career out of aping her sound and her moves. Sister Rosetta challenged her audience and preconceived notions about music with a new sound. She drew on her musical experience and fused it into a vibrant blend of expressive melodies filled with wails, shrieks and heaping helpings of soul. 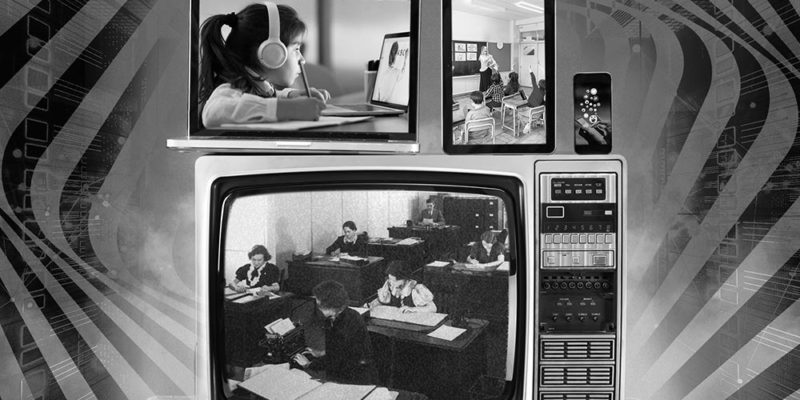